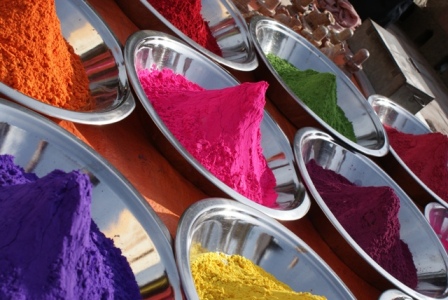 I have always argued that India is gaining its rightful place among the world’s political powers, and in the future, it will be on par also with the economic powers of the world.

Greater India – an area composed of different countries and regions in South and Southeast Asia that were historically influenced by Indian culture – has always fascinated and attracted the attention of the world. Poland has not been an exception. Therefore we, at the Department of the Languages and Cultures of India and South Asia at the Institute of Oriental Studies at the Jagiellonian University, offer the kind of studies that go beyond the political boundaries of today's India. We are also convinced that the solid philological education we offer enables our students to acquire the best and most reliable knowledge of the culture and civilization of Greater India.

Indology is the study of India and South Asia - its languages, literature, history, art, culture, different religious traditions and much more. Studying Indology at the Institute of Oriental Studies of the Jagiellonian University, you will learn Indian languages, which are the key to getting to know Greater India culture and civilization. The civilisation which since ancient times influenced and continues to influence at present the whole region of South and Southeast Asia. You will gain a broad understanding of modern India, but you will also get to know why knowledge on and about ancient Sanskrit language and the Vedas changed Europe. You will discover the miracle that India was and still is.

Who can study Indology?

What can you learn by studying Indology?

By studying Indology you will learn several Indian languages (Hindi, Urdu, Tamil, Sanskrit) and you will gain professional knowledge about ancient and modern India. These will be the so-called hard competencies, the possession of which will be confirmed by your diploma in philology.

During the scholarship in India, in addition to polishing your language, you will also learn how to bargain prices in the bazaar, how to defeat the Indian bureaucracy, how to save your life when crossing the street in Delhi or Mumbai - you will therefore gain an invaluable sum of soft skills: communication skills, time management skills, and stress resistance.

What makes us stand out?

Our diploma is a guarantee for the prospective employer that you are proficient in Indian languages. What is equally important, it confirms that by studying Indology you have acquired intercultural communication skills.

The acquisition of such competencies is guaranteed by our professional staff, consisting of specialists recognized in the country and abroad. We have native speakers teaching Indian languages, we cooperate with universities in Poland and abroad. If you become our student, you will go to study camps in Rabka or Zakopane, you will also have a chance to go on an

Erasmus + scholarship to many European countries. Every year we offer scholarships to India.

Indology is one the longest existing and best-established disciplines of Oriental Studies taught the Jagiellonian University. The first Sanskrit Grammar lectures were conducted in the years 1860-62. The history of the Cracovian Indology (nowadays the Department of Languages and Cultures of India and South Asia) is made up of extraordinary personalities of Polish and world Indology, among whom one needs to mention Helena Willman-Grabowska (1870-1957), Andrzej Gawroński (1885-1927) and Tadeusz Pobożniak (1910-1990).

Helena Willman-Grabowska, the first woman in the history of the Jagiellonian University with the title of full professor (1937), lecturer at the Paris Sorbonne, originator of Polish Indian studies, co-author of Iranian studies, started lecturing at the Jagiellonian University in 1927, after her return to Poland from France. In 1928 Willman-Grabowska was appointed to the Chair of Sanskrit and Indian Philology. She was not only an excellent researcher and teacher but also a good manager, not sparing her own time and money to create the best centre for Indian studies at the JU. She established an Indology library and expanded the Sanskrit studies by introducing lectures on India's cultural, economic and social issues, introduced in the curriculum the history of Buddhism, the Pali language and modern Indian languages, among them the ones belonging to the Dravidian family.

A brilliant linguist, who knew more than 100 languages, Andrzej Gawroński started giving his Indological lectures at the JU in 1913. In 1916, he became a professor of Sanskrit philology. Gawroński is the author of the first Sanskrit textbook in Polish, still in use in Poland

Tadeusz Pobożniak, also a linguist, was the one who introduced a Hindi language course in the 1970s.

Our highly qualified and internationally recognized staff educates specialists in the fields of cultures and languages the region of South Asia (Pakistan, Bangladesh, Nepal, Sri Lanka) that have grown up from the Sanskrit tradition, and their inhabitants communicate in the languages taught at the Department of Languages and Cultures of India and South Asia. Our staff also collaborates with many research centres around the world and is involved in international research projects. We conduct our research under prestigious foreign scholarships and Polish research grants.

The key to the multifaceted understanding of Indian and South Asian civilization and its contemporary realities is language. Therefore we give you a sound knowledge of different Indian languages, although it is not our only goal. We are convinced that language is a fundamental and indispensable tool to you direct insight into the historical and cultural processes that shape the region. Proficiency in South Asian languages will enable you to assess objectively and without prejudice contemporary situation in the region, to understand better the intricacies of the political, economic, cultural and historical conditioning of the region, and the interrelations and disputes which go on and affect its contemporary situation.

We understand that classes on the classical Sanskrit and contemporary North India linguistic, literary, and cultural traditions, that is Hindi and Urdu, although essential, are neither sufficient for communication purposes nor can they give a full picture of not only  South Asia but also of India itself. Therefore we also offer courses on the equally important civilization, economic and political region of the Dravidian culture - in this case, we propose the Tamil language as a medium.

To educate versatile experts on India and South Asia, in addition to a wide range of language classes, during which we develop and strengthen both communication and translation skills (language courses conducted by native speakers, classes on media language, cinema language, reading and translating literary, media, scientific and technical texts), we offer a spectrum of courses on Greater India civilization. We teach courses on Indian art and culture, philosophy and history, as well as geography with elements of ethnography. We provide you with a sound knowledge of different Indian literary traditions: Vedic, Sanskrit, Hindi, Urdu, as well as Literary traditions of South India and contemporary Indian literature in English. We have courses on different religious and philosophical traditions of India and South Asia: Hinduism, Jainism, Buddhism, and Islam. We have introductory courses related to various performative forms of Indian and South Asian art. We have lectures related to contemporary social issues of India and South Asia.

Past Present India and South Asia

Understanding the mechanisms and phenomena occurring in modern India and South Asia is impossible without the knowledge of their classical culture. Therefore we propose an effective and developing method of combining the learning of two Indian languages. In the first-cycle studies, we focus on the Hindi and Sanskrit language areas. In the second-cycle studies, we offer the choice of the main language (Hindi or Sanskrit) and a complementary language (Sanskrit, Tamil or Urdu, respectively, or Hindi, Tamil or Urdu). We do not forget about the English language, the lingua franca of the whole South Asia, also important for the South Asian diaspora - in addition to 7 semesters of the language course (4 semesters at the 1st degree, full-time (BA) studies and 3 semesters at the 2nd (MA) stage), we offer courses on Indian literature in English and on the shared Anglo-Indian cultural heritage.

Studies in Poland and abroad

Students gain the opportunity to develop their interests and polish already acquired skills both in Poland and abroad. Our tradition is an annual trip to a research camp in Rabka or Zakopane in the Tatra Mountains (also with the participation of students and staff from other Indology centres in Poland); The Indian Days in Kraków, an annual event which aim is to spread and popularize the knowledge of India, is organized jointly by our students, in particular the members of the Koło Naukowe Indologów UJ (Indology Students’ Association at the JU) and staff. In 2013, we have published students' translations from Indian languages to Polish, and we hope to continue the project. We regularly organize meetings with eminent figures from the world of science and culture: we hosted not only outstanding researchers in the field of broadly understood Indology (Giuliano Boccali, Johannes Bronkhorst, Gerhard Oberhammer, Alexis Sanderson, Raffaele Torella, to name just a few) and representatives of the diplomatic corps, but also respected Indian publishers (Urvashi Butalia, Zubaan Books), writers (Suketu Mehta) and legendary actors (Amitabh Bachchan).

We offer our students studies in leading Indian centres (under the ICCR and ECAF programs) and at the European universities (under the Erasmus program: Austria, the Czech Republic, Germany, Norway, Italy). We work closely with the Indian-Polish Association for the Development of Culture (IPCC).

Our main task is to educate experts in the Indian and South Asian cultural region who thanks to the acquired qualifications and skills, mainly linguistic, but also in the field of broadly understood knowledge of the cultures and realities of India and neighbouring countries, have the opportunity to work in diplomatic and uniformed services, cultural, scientific and research institutions, media, publishing houses, business, trade, tourism. Our graduates include advisers and analysts of the political situation in South Asian countries (India, Pakistan), Hindi and Urdu translators cooperating with the International Committee of the Red Cross in areas affected by armed conflicts (India, Pakistan), employees dealing with refugee issues and national security (India, Pakistan), teachers of Indian languages, yoga and Indian dances instructors in Poland and even Polish language teachers in India.